The BEST Johnny Depp/Capt. Jack impersonator…hands down!!
“If you are looking for a spitting image/personality of the Captain himself, this is your guy! I hired him for my daughter’s 5th birthday, because she just adores Jack Sparrow…to the point where she knows Johnny Depp’s face VERY well. No doubt, if it had been anyone else, she would have known it was not the real thing. Fantastic job from start to finish! He and his wonderful wife traveled all the way to New Orleans to do our job. They certainly played a huge part in making our daughter’s dream of having Captain Jack to herself, come to life!”

AMAZING!!!!!!
“Our office hired “Johnny” to come in for our bosses Birthday party and not only was she thrilled with how much he resembled Johnny but he was such a gentle spirit as well. Her HUGE smile and the way she looked at him made it all worth it!! Johnny certainly was spot on and such a gentleman. From the booking of the event all the way to the second he arrived, everything was so easy! Jason & Mikalee, thank you for making her Birthday so special and for allowing us to take many photos!! We’re definitely going to hire you again next year. Thanks again!!”

Highly Recommend!!!
“Thank you so much for doing such a wonderful showing at my daughters 13th birthday party. All of her friends and their parents were happily surprised when you walked in. You not only look just like Capt Jack but you were on time and very professional. I know at least 4 parents that took your information b/c they want to book you for their parties. I am thinking about throwing a big Halloween party next year and we will definitely be hiring you for that party. I have been to parties with “look a-likes” and they do not compare at all to you. Thank you so much for making our daughters party such a wonderful experience and memory. :D”

The Hit of Our Sales & Marketing Event
“I work in the sales & marketing industry, so it’s an understatement to say that my colleagues and coworkers have seen it all and are hard to impress. But WOW did having Captain Jack at our gathering do the trick! I couldn’t believe what a great job he did. Not only did he look JUST like the character, but he had the mannerisms down to a t. Poor Captain Jack must have been exhausted by the end of the night, because EVERYONE wanted to talk to him and have their picture taken with him.

Everyone at my office who attended the event couldn’t stop talking about him – one sweet girl even thought we had somehow wrangled Johnny Depp himself to show up :-).

If you’re not sure how to add a little fun and something memorable to your next corporate event, I really suggest giving this a go. Who doesn’t want to hang out with Jack Sparrow? If it’s an event with a bar, you might want to stock some extra rum…people tend to get in the spirit.”

Happy Wife!! He was great!!
“OK so my wife is a huge Johnny Depp fan. One of her friends showed her pictures from an event that had this look a like in it. She told me that she had to have him at a party. So I surprised her at our 10th anniversary party. He was amazing! She was over the moon. It was unbelievable how much be looked like the real deal. All of our guests had a great time too. I would def tell anyone to hire him. I could not have asked for a better experience. I know my wife would def agree!!”

The Original Captain Jack Impersonator!
“If you’re looking for the REAL Captain Jack, might I suggest hiring Jason Walker! He is far and away AS CLOSE AS YOU CAN GET to the Real Thing. He’s been compared to Johnny Depp even without the costume and all the garb! Apparently, the man gets stopped regularly even in airports and is asked for autographs!

But about the party! When he came to my birthday party, we all thought the REAL Johnny Depp had graced us with his presence! He had the mannerisms, accent, and overall impersonation down! Everyone was able to have their own personal time with the Captain and he was very gracious with his time and photos. He gave everyone a thrill and provided unforgettable memories and stories for all to take home! It was hands down the best party of my life!”

I can not compliment this guy enough, he is well worth the money.
“I am a professional Santa Claus/Actor in Stage ,Screen, T.v. I used This Captain Jack Sparrow for a HUGH Event. I looked at several others…but my gut lead me to offer the gig to This Captain Jack. He was the hit of this event!!!! People were amazed…Teenagers were thrilled, Children were Excited….and Elderly people thought he was a “GOOD-LOOKING” Pirate. If you want to hire a first rate Captain Jack THIS is the one to hire!!! He was always at the 3 day event early, ready to go…Professional..and the Guests were always the center of attention. He can /and does adapt to any and all situations. I can not compliment this guy enough, he is well worth the money. If you are having a Children’s party, Teen party, Adult Party, Grand opening, and want to have fun, hire Johnny Depp II! Call him NOW. I think he is the SOUTHEAST’s best kept secret…so hire him before LAS VEGAS or HOLLYWOOD gets him. I am planning a huge LUAU…and you can bet he is the first Entertainer that I will call… I am not in the habit of endorsing ANY performers…but the fact is he is only the 2nd one that I have ever put a seal of approval on. I am a gentleman of high standards, and take my job very seriously. I recognize This Captain JACK SPARROW as the best in the Entire SOUTHEAST!!!! Yes this gentleman is SANTA APPROVED. You will not be sorry!!” 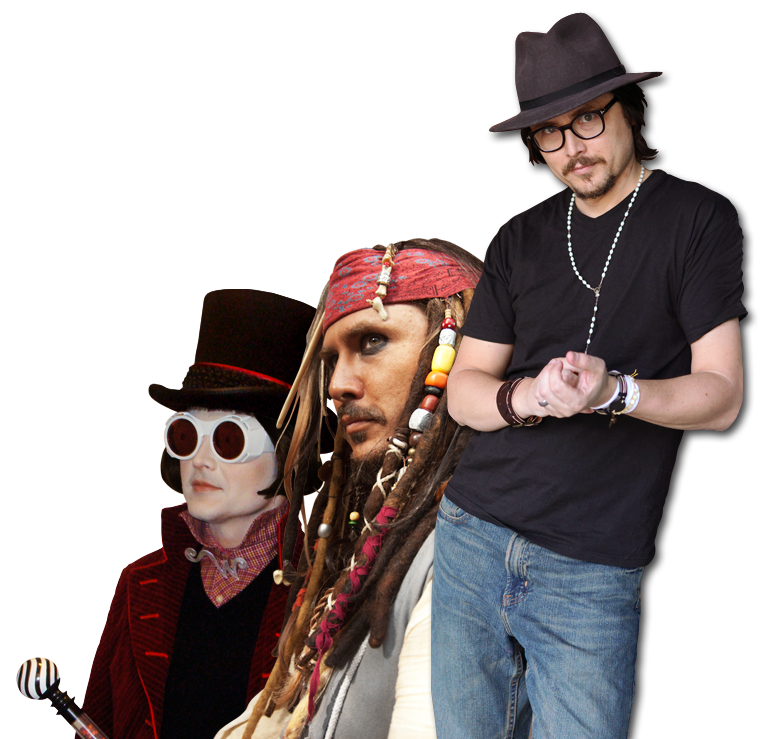